NIST's latest release: A new design of small and bright nano-level LEDs that overcomes long-standing LED efficiency problems and can be converted into lasers to start a team of scientists from the National Institute of Standards and Technology (NIST) developed a new type of LED. The LED may be the key to solving the long-standing problem of light source efficiency limitations. This concept was demonstrated in the laboratory with micro LEDs, which achieved a significant increase in brightness and the ability to generate laser light.

The team also includes scientists from the University of Maryland, Rensselaer Polytechnic Institute and IBM Thomas J. Waston Research Center. The brightness of this LED is 100 to 1000 times higher than that of a conventional submicron LED.

According to Babak Nikoobakht of NIST, the LED uses the same materials as traditional LEDs, but the difference lies in their shape. The LED uses a new structure for manufacturing LEDs.

LED lights have been around for decades, but the development of bright LEDs won the Nobel Prize and opened a new era of lighting. However, even modern LEDs have their limitations. To a certain extent, increasing the power of the LED will make it lighter, but the brightness will soon decrease, making the efficiency of the LED very low. This problem, called "efficiency drop" by the industry, hinders the application of LEDs in many promising application fields, from communication technology to antivirus.

The team conducted a new design experiment on the LED: Unlike the graphic design used in traditional LEDs, the researchers used a long and thin zinc oxide wire to create a light source, which they called fins ("long" and " "Skinny" is relatively speaking: each fin is only about 5 microns long, about one-tenth the width of the average human hair). The fin array looks like a small comb and can extend to an area of 1 cm or more. 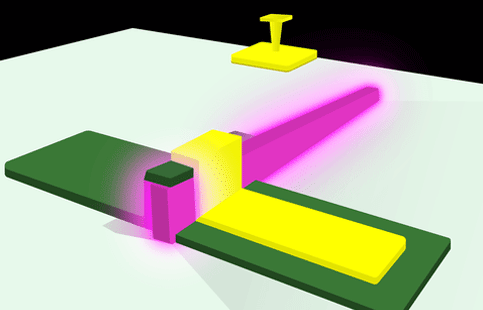 This new design can emit bright light across the boundary wavelengths of violet and ultraviolet light, and the energy generated is 100 to 1000 times that of a typical small LED, which is an important basic discovery.

Nikoobakht said: "A typical LED with an area less than 1 square micron has a luminous power of about 22 nanowatts, but this type of LED can generate up to 20 microwatts of power. This shows that this design can overcome the drop in LED efficiency and make the light source change. Brighter.”

While increasing the current, the research team also discovered another surprising phenomenon. Although the LED initially emits light in one wavelength range, its relatively wide light emission is finally reduced to two wavelengths of intense purple light. This clearly shows that their micro LED has become a micro laser.

Nikoobakht said: "It takes a lot of effort to convert an LED into a laser. It usually requires coupling the LED with a resonant cavity so that the light is reflected around the resonant cavity to generate laser light. The fin design can complete the whole work by itself, without the need Add additional cavities."

Miniature lasers are essential for chip-scale applications not only in the field of chemical sensing, but also in next-generation handheld communication products, high-definition displays, and disinfection.

Nikoobakht said: "It has the potential to become an important component. Although this is not the smallest laser transmitter made by humans, it is very bright. If the efficiency does not drop, it will be of great use." (Source: International Semiconductor ISA)