Improving the performance of LEDs has always been a research topic for scientists. The research team of Imperial College London recently proposed a method of embedding a customizable meta-grid of nanoparticles in LEDs, which can improve the light output and lifetime of LEDs. 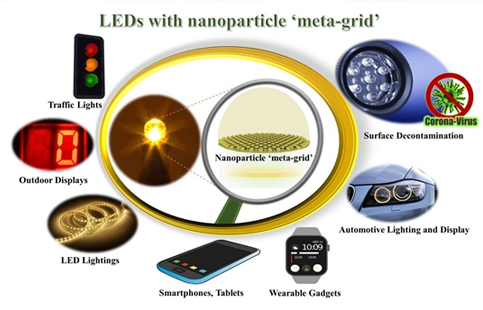 Studies have shown that under peak emission wavelength conditions, the light transmission at the interface of a typical LED chip/encapsulation material can increase up to 99%, while it is only 84% under normal incidence. This solution can improve the light transmission in the photon escape cone in the entire LED emission spectrum, which not only reduces energy consumption, but also improves the life of the LED by reducing heat generated by unnecessary reflections inside the chip.

Researchers believe that this solution is expected to be easily used and applied to existing semiconductor equipment technology, and can also be used independently or combined with other methods to reduce the critical angle loss of LEDs.

It is reported that this study was published in the journal "Light Science & Application" in July. (Compiled by LEDinside Janice)